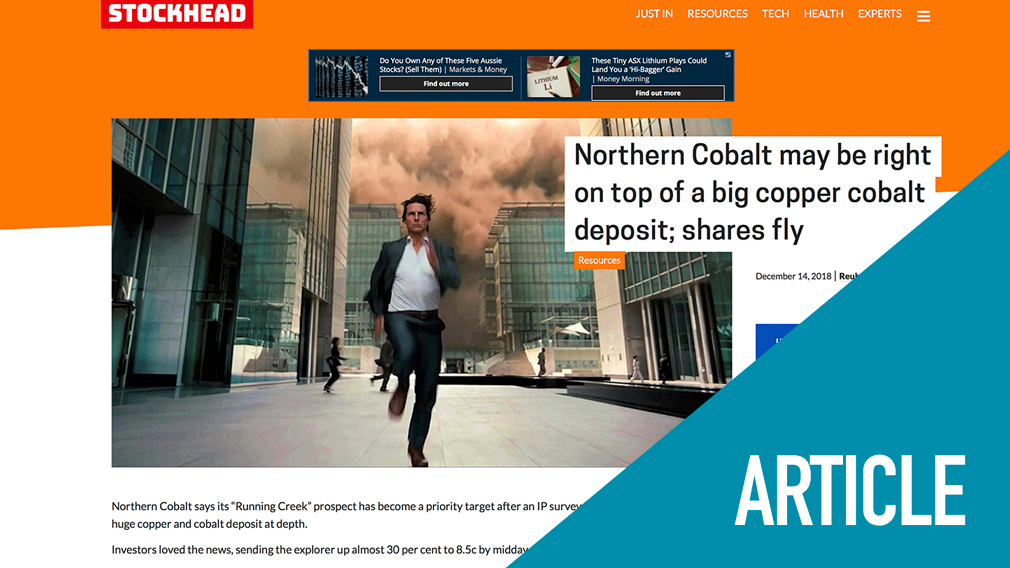 Read the article on Stockhead

Northern Cobalt may be right on top of a big copper cobalt deposit; shares fly

Northern Cobalt says its “Running Creek” prospect has become a priority target after an IP survey identified what could be a huge copper and cobalt deposit at depth.

Investors loved the news, sending the explorer up almost 30 per cent to 8.5c by midday.

Induced Polarisation (IP) is a geophysical method used to identify the electrical chargeability of minerals below the earth’s surface, which helps explorers focus their drilling programs.

Northern Cobalt (ASX:N27)  told investors the “large chargeable feature” identified by the recent IP survey could be an extension of shallow high-grade copper-cobalt mineralisation at depth.

A drilling program at Running Creek – part of the Wollogorang cobalt project in the Northern Territory — is now being planned to test this feature as soon as possible.

The company is even considering using a helicopter-supported diamond drill rig during the oncoming wet season “since the camp and other infrastructure required are still in place from the current drill program”.

The best mineralisation contained a thick intersection of high-grade copper with associated cobalt — 55 metres grading 0.78 per cent copper from surface, which included a smaller section of 12 metres grading  380ppm cobalt from 22m.

Northern Cobalt managing director Michael Schwarz told Stockhead both the IP Survey and the assay results prompted the company to change its plans and  drill Running Creek as soon as possible.

“We are pretty excited about this anomaly because it seems to be [directly linked] to the [existing] copper and cobalt mineralisation,” he said.

“The mineralisation could be both deeper and of a larger scale than we had previously thought.”

“We are looking for ways to drill it during the wet season, [possibly by] flying in a small diamond rig.

“We already have a camp and infrastructure set up from our program that we just completed — about 1km away — so we won’t have to drag a lot of big equipment in.”

Read the article on Stockhead