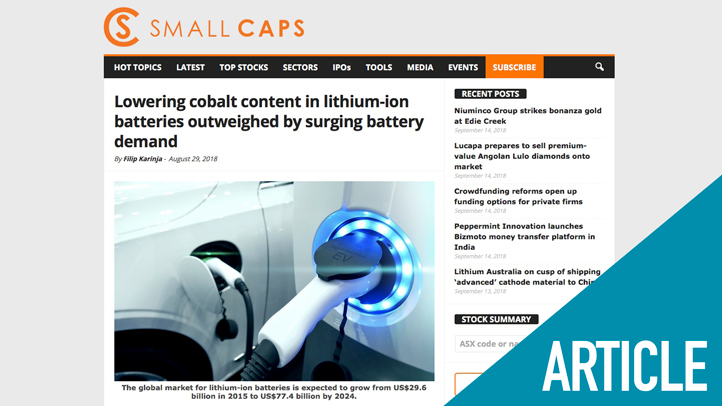 An interesting read on the debate on the cobalt content in lithium-ion batteries - includes Northern Cobalt's MD Mike Schwarz. Read the original article on SmallCaps here.

There is no argument that cobalt prices are keeping the cost of producing lithium-ion batteries high and causing headaches for the manufacturers of the next big thing: electric vehicles (EVs).

Elon Musk, chief executive officer of Tesla, has generated a lot of headlines this year and the battery metals market has not escaped his attention with his series of comments and cryptic tweets about trying to reduce the cobalt content in the next generation of Tesla’s car batteries.

These comments coincided with the recent falls in the cobalt price and spawned a whole series of click-bait headlines about it being the end of the road for the cobalt miners. But, are people jumping to conclusions?

What went largely unreported was that just two weeks later it was leaked that Panasonic was planning to triple its cobalt usage by 2020.

So, is it time to cash in on the cobalt price rises of the past few years?

Are cobalt-free batteries just around the corner?

Or could dropping the cobalt content in batteries actually lead to the tipping point for EVs by making them more affordable and, therefore, drive an increase in the overall demand for the mineral?

According to a report recently published by Transparency Market Research, the global market for lithium-ion batteries is expected to grow from US$29.68 billion in 2015 to US$77.42 billion by 2024.

To get to the heart of the cobalt problem it is important to understand why manufacturers, like Tesla, continue to pay for this metal even though the price has tripled over the last two years.

Cobalt is a key ingredient in three of the five primary lithium-ion battery formulas.

Its unique properties allow manufacturers to safely increase the energy density of a battery from around 100watt hours per kilogram to 250Wh/kg.

In saying that, there are a number of alternative cobalt-free batteries under development.

These include some radical new battery designs being tested at the Ceder Group‘s research labs at the University of California and by start-ups like Canadian company NanoOne, who are trying to shake up the industry.

But none of these solutions are battle tested yet, let alone in any position to meet the world’s insatiable demand for batteries. Benchmark Minerals analyst Caspar Rawles recently spoke about alternatives to lithium-ion batteries saying they are at several years away.

“There are things like advanced lithium-ion batteries, which use little cobalt and could be here in a couple of years,” Mr Rawles noted. “But we’re really getting toward the physiochemical limit of what those materials can do.”

“To me, the next generation is something like solid-state batteries with the solid anode, but they’re a long way off,” he pointed out.

“Other things, like sodium-ion batteries, are still on the lab scale and you need to get from lab to research to pilot testing, to cathode testing to battery testing. We’re looking at least 10 more years for that,” Mr Rawles added.

Meanwhile, billion-dollar global materials technology and recycling group Umicore’s chief executive officer Marc Grynberg was even more blunt about removing cobalt, saying it was “not going to happen in the next three decades”.

“It simply doesn’t work,” he added.

According to Northern Cobalt’s (ASX: N27) managing director Mike Schwarz the recent moves by big manufacturers seems to back up Mr Grynberg’s line of thought.

“Before we started developing our Wollogorang cobalt project in northern Australia we spent a considerable amount of time analysing the market factors,” he said.

“When you take into account the many supply issues and the drop-off in exploration during the mining downturn, we are almost certainly looking at a global shortage of cobalt at some point in the next few years.”

“Manufacturers have also seen this coming and are approaching mining companies with big off-take agreements for up to 10 years. We see a lot of potential in this space over the next few years.”

For mobile devices, EVs, and the next generation of applications, like electric planes, it is all about packing the most power into the smallest battery possible and for the foreseeable future that means adding cobalt.

Let’s face it when it comes to electric cars who is going to fork out $100,000 on a car with half the power and range as its competitor because the battery is a couple of hundred dollars cheaper to manufacture?

Can you imagine Tesla or BMW releasing a car like that? The most likely situation is that the big manufacturers will continue to try and reduce the cobalt levels in the current nickel, cobalt, aluminium (NCA) and nickel, manganese, cobalt (NMC) battery mixes to decrease the cost of materials and lower their exposure to supply risks.

Battery chemist Gerbrand Ceder at the University of California, who runs the Ceder Lab and is at the forefront of cobalt-free battery research, was quoted by the Royal Society of Chemistry in March this year saying that while cobalt prices have spiked dramatically, he believes that there is no ceiling.

“It will just go to whoever pays the most. That will be the Apples and Samsungs of this world,” he purportedly said.

Because a smart phone only uses between 5-10 grams of cobalt per device, Apple can afford to keep paying top dollar.

But EV car manufacturers, which need between 5kg and 30kg cobalt per car battery, the cobalt content needs to be reduced to make them competitive with the internal combustion engines (ICE) that currently dominate the market.

The age of electric vehicles

Even though they account for only 3% of vehicle sales today there is no doubt that the age of the EV is coming.

The question is: when will it hit?

More conservative estimates, by organisations like OPEC, are that market penetration of EV will reach between 140 and 250 million by 2040.

But Fitch Ratings released a statement said: “considering a scenario where EVs cost and range are comparable to ICEs, consumers prefer driving EVs, policymakers mandate and support electrification, and carmakers see cost benefits of focusing on one drivetrain, it is not unreasonable to expect global EV stock by 2040 of over 1 billion, or more than half the vehicles on the road.”

Recent figures released by China’s EV manufacturers show they have already sold over 98% of the cars they have produced in 2018, indicates consumers want them.

Also, governments are pushing them.

Initiatives like the UK’s Road to Zero strategy, with an ambitious goal of making all new vehicle sales either electric or hybrids by 2040, are gaining momentum. The last hurdle is the manufacturers’ ability to get the price and range right – and that means solving the battery conundrum.

If they can do that, we could very well see the tipping point for EVs within the next two decades.

A scenario that would mean any reduction of the cobalt content would likely be far outweighed by a four-to-five-fold increase in demand for batteries.

In, which case, the party for cobalt explorers will keep going for longer than Mr Musk and his battery-powered bandwagon expected.